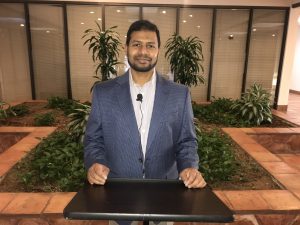 Professor Munshi Shams is a Bangladeshi-American Entrepreneur and humanitarian widely known for his passionate contribution on world peace, universal human rights and non-violent activism. His early education and career were in the field of Information Technology. While advancing in his career as a Network Engineer, Munshi started his own company in the computer industry and within a few years established himself as a successful entrepreneur. Later, he joined Richland College as a professor of Computer and Information Technology.

The deepest passion for universal peace and human rights eventually led Munshi to expand his education outside of the computer industry.  He studied International Political Economy at University of Texas at Dallas and graduated with Magna Cum Laude honors. Through his writings, speeches and multimedia productions, Professor Munshi has been promoting both local and international justice, inter-religious dialogue and peaceful activism. At the same time, he has committed himself to explain the true message of Islam to all of humanity.  He frequently leads Friday congregational prayers and delivers sermons at surrounding Mosques and explains Islam at universities, other religious institutions and multi-faith assemblies.

With the dream of rendering truth and fairness to every human and peace and advancement to every community, Professor Munshi founded Studio Humanity, which broadcasts several inspirational programs to the world.  Call 4 Humanity (www.call4humanity.org) promotes that every human must be treated with fairness, respect and love regardless of who he or she may be. Islam 4 humanity (www.islam4humanity.org) is dedicated to share the true and authentic teachings of Islam with people of all faith. New Awakening (Bangla: নব-জাগরণ)(www.nobojagoron.org) aims to inspire Bangladeshi population worldwide to bring about a 21st century enlightenment and renaissance of human values.

You can reach Professor Munshi at munshi@islam4humanity.org if you have any questions or comments or if you like to invite him to speak at your event.